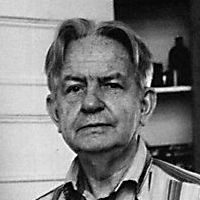 Alfred Julio Jensen (December 11, 1903; Guatemala City, Guatemala – April 4, 1981, Livingston, New Jersey) was an abstract painter. He is best known for his grids of tiny, brightly colored triangles and squares, painted in thick impasto.[1] He was one of a number of artists in the 1960s working with serial images.
Jensen was born in Guatemala and moved to Denmark at age 7 to live with his uncle following the death of his mother. After graduating from school in Denmark, Jensen spent some time working as a cabin boy and traveling before attending art school in San Diego, Munich, and Paris. In 1929 while in school in Paris Jensen met Saidie May, who would become his patron while he worked as her art advisor for the next 20 years. Jensen continued to study art and theory while he and Saidie traveled extensively acquiring art for her collection and meeting artists. In 1951 Jensen settled in New York and began to concentrate exclusively on painting following the death of Saidie May. At this time Jensen began to develop friendships with other important artists, like Mark Rothko, as well as patrons and dealers. In 1961 Jensen had his first solo exhibition at the Solomon R. Guggenheim Museum in New York. In 1964 he and his wife, Regina, traveled and painted for six months in Italy, Egypt, Greece, France and Switzerland. They continued to travel, study, and paint until 1972 when, along with their first child, Anna, they moved to New Jersey. In 1972 he joined the Pace Gallery and exhibited canvases based on I Ching and the Delphic Oracle. Jensen continued to exhibit his works in between travel throughout the rest of his life until 1981 when he passed away in Livingston, New Jersey.
His first solo exhibition was held in 1952 at the John Heller Gallery, New York. He had solo shows at the Guggenheim (1961), Stedelijk Museum, Amsterdam (1964). In 1978/9 his exhibition Paintings and Diagrams From the Years 1957-1977 was shown at the São Paulo Art Biennial, and toured American museums, including the Albright-Knox Art Gallery, the Museum of Contemporary Art, Chicago and the San Francisco Museum of Modern Art.
Museum exhibitions after his death include a retrospective at the Solomon R. Guggenheim Museum in New York (1985), Dia Center for the Arts (2001) and Santa Monica Museum of Art (2003).
His work is held in numerous public collections including the Museum of Modern Art, Albright-Knox Art Gallery, Aldrich Contemporary Art Museum, Art Gallery of Western Australia, Baltimore Museum of Art, Dallas Museum of Art, Dia Center for the Arts, Solomon R. Guggenheim Museum, Hirshhorn Museum and Sculpture Garden, Los Angeles County Museum of Art, Louisiana Museum of Modern Art, National Gallery of Art, San Francisco Museum of Modern Art, Smithsonian Institution and Whitney Museum of American Art.
A resident of Glen Ridge, New Jersey, Jensen died at a nursing home in Livingston, New Jersey on April 4, 1981, at the age of 77 due to cancer. 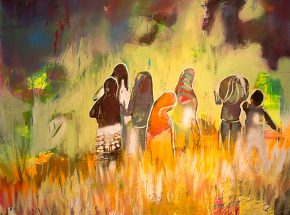