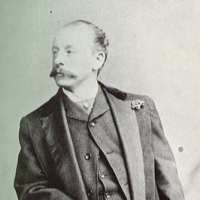 Alfred Thompson Bricher began his career as a painter of autumnal landscapes. Over the course of the 1870s, however, he devoted himself almost exclusively to marine painting. His favorite subjects were the beaches and headlands of the New England coast, and he excelled at depicting such scenes in calm weather lit by serene, luminous skies. Bricher became a member of the American Society of Painters in Water Colors in 1874, and was elected an associate of the National
Academy of Design in 1879. His paintings were exhibited at the Boston Athenaeum and the Boston Art Club in Massachusetts; the National Academy of Design and the Brooklyn Art Association in New York; the Pennsylvania Academy of the Fine Arts, Philadelphia, Pennsylvania; and the Art Institute of Chicago, Illinois.