Alice Plaster of Bowie, Maryland is a highly regarded visual artist and active in the art community. Alice has taught painting in both the public and private sectors. Critically acclaimed, her paintings have received major awards and are exhibited both regionally and nationally. A longtime favorite of collectors, her canvasses can be found in scores of private collections.

Ms. Plaster’s major body of work comprises dramatic oil paintings of classic cars rendered in a flowing, reflective, ultra-realistic style that takes the viewer’s eye past the surface of the painting and into deeper layers of interpretation. Filled with robust lines, organic curves, vibrant color, myriad textures, and unexpected content, the paintings draw the viewer about the surface before plunging him into deeper pools of visual content. Sara Wildberger of the Washington Post aptly describes Alice’s entries in the exhibition “ Poetry of Paint” as “nearly-liquid with chrome and bright reflections.”

Internationally known artist Sam Gilliam selected Ms. Plaster’s molten cherry and chrome 1958 Mercury Parklane for exhibit in “Seeing Red: A Juried Exhibition.” The same artwork was selected by Stephen Bennett Phillips, Curator at The Phillips Collection and juror of the “2003 Open Exhibition” for inclusion in the exhibit at the Verizon Gallery in Annandale, Virginia. At a previous award ceremony, J. Carter Brown, Director Emeritus of the National Gallery of Art waxed eloquent about 1928 Packard, a full-frontal tour de force of line, texture, technique, subtlety, and meticulousness.
While conferring upon it the 1998 First Place Award for oil painting Mr. Brown positively gushed, “It is just a smashing image. It has all this high-tech gloss, except when you look at it carefully there is a great deal of the sense of the paintbrush in it.” He continued comparing the piece to Byzantine icons stating that the painting possessed an iconic quality that insisted on such a comparison. Mr. Brown expressed admiration for the “wonderful colors” and “dead-pan humor” of the piece. He concluded by proclaiming it a “terrific achievement” that “thoroughly deserves its prize.”

The Fairfax Arts Council, as part of the Corporate Arts Program for 2003, coordinated solo exhibitions of Alice’s works at the headquarters of the First Virginia Bank and Cox Communications.

Statement from the artist, 2006 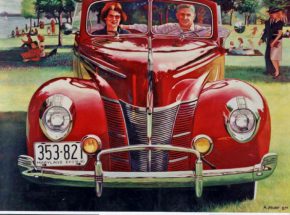