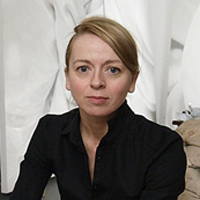 Alison Watt is an artist who lives and works in Edinburgh. Initially known for her figurative painting, by the 1990s, she had begun to incorporate representations of fabric in her work. In 2007, Watt became the seventh National Gallery Associate Artist and the youngest in its history. In 2008, her residency culminated in an exhibition Alison Watt: Phantom. An expert in the representation of the material, Watt paints the details of fabric and textile in Host while also acknowledging the depicted forms’ allusions to abstraction. Alison Watt attended Glasgow School of Art and continued her post graduate Studies there. From 2006 to 2008, Watt was Associate Artist at The National Gallery of Art in London.