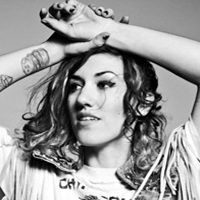 Allison Schulnik is the daughter of an architect from the Bronx and a painter from British Columbia, both of whom studied at Pratt Institute in the 1960’s. After studying and performing many forms of dance, she left San Diego for CalArts. Combining the movement of dance with painting, Allison chose to study Experimental Animation under the great Jules Engel, and received her Bachelor of Fine Arts degree in 2000. Her paintings and films have been exhibited internationally at venues including the Nerman Museum of Contemporary Art, Kansas City, Haifa Museum of Art, Israel, Santa Barbara Museum of Art, San Diego Museum of Art, Hammer Museum, Los Angeles, Lehmann Maupin Gallery, NY, Canada, NY, Bellwether, NY, Roberts & Tilton, Los Angeles, Mark Moore Gallery, Los Angeles, Black Dragon Society, Los Angeles, Unosunove, Rome, Rokeby, London, Seomi & Tuus, Seoul, Groeflin Maag Galerie, Basel, etc… Schulnik was recently selected as one of the “ONES TO WATCH” by ART REVIEW,(Issue 20) and was as one of the “45 Painters Under 45 You Should Know” – featured on the cover of the CALENDAR Section – in which critic Christopher Knight selected her as part of the acclaimed core of young artists that “Help Make the L.A. Art Scene”. She made her first film at age 18 in 1997, and has completed three award-winning experimentally animated 16mm films since then that played at many film festivals internationally. She also recently completed two new clay-mation videos, her first in 8 years – Hobo Clown and Forest. Forest was her first music video, commissioned for band Grizzly Bear.