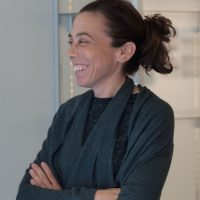 American artist Alyson Shotz was born in Glendale, Arizona, in 1964, and is based in Brooklyn, New York. She received a Bachelor of Fine Arts degree in painting from the Rhode Island School of Design, Providence (1987), and a Master of Fine Arts degree from the University of Washington, Seattle (1991). Prior to becoming an art student, Shotz briefly studied geology at the University of Colorado, Boulder, focusing on the effects and role of water on Earth—an interest that continues to influence her work. A painter early on, Shotz began in the late 1990s to integrate sculpture into her practice, which explores an interest in nature and the identity of space. Shotz is known for manipulating synthetic materials to investigate modes of perception, experiential boundaries, and natural and scientific phenomena. She uses plastic, glass, steel, beads, mirrors, and threads to create a uniting theme in her work: physical structures that simultaneously comment on the space surrounding the piece, often through the capture of light and shadow, and highlight the relationship and interaction between an artwork’s space and the viewer.

Shotz has also taken her interest in light, space, and reflections into the realm of works on paper—prints and photography. Coalescent is a print on black ground that looks like an x-ray of a human skull from far away. Up close, natural forms such as helixes, flowers, and gossamer spider-webs come into view, all perfectly mirroring one another across a central vertical line. The bilateral symmetry of Coalescent is a phenomenon commonly found in nature, and, although the work is composed with great artifice, it is essentially inspired by nature. The image appears as a human skull from a distance but contains shapes resembling plants, thus creating a commentary on the intertwined relationship between nature and humanity, implying that humanity itself is built upon these delicate natural elements.

In both 1999 and 2010, Shotz was awarded a Pollock-Krasner Foundation grant; in 2004, she was the recipient of the New York Foundation for the Arts Fellowship in painting. Her sculptures have been installed in solo presentations at various international institutions. Her work has been shown in multiple group exhibitions throughout the U.S.