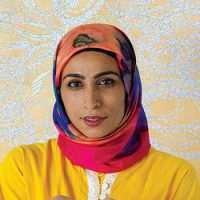 Pakistani-born and American-based artist Ambreen Butt art often combines two traditions: those of Indian-Persian and Western painting in attempts to reconcile the gulf between past and present cultures. While her subject matter is often personal, it also universal, exploring the nature of power, language, and often, depictions of the female body.

Of her commissioned installation for the U.S. Embassy in Islamabad, the artist says, “This project is inspired by my recent investigations of the tradition of classical Arabic language and its visual formation. The meditative process of repetitive recitation of the selective classical text from the Qur’an, also known as ‘dhikar’ or ‘zikar’, and its physical manifestation through stylized mark-making in the form of calligraphy (khattati), became some of the points of origin for this work.”

She continues, “These text-based patterns in blues or greens are a reminiscent of traditional kashi-kari tile designs used for centuries to decorate prominent public buildings, mosques, and palaces. The patterns are composed of organic and floral designs in deep saturated colors. Installed in the main gallery and receiving area of the embassy, the very nature of the floral design brings an intimacy to the large space and makes the space operate on both grand and personal levels. The patterns are composed of thousands of three-dimensional cast resin letterforms that I initially drew and stylized.
This apparently recognizable reference to the traditions of Islamic calligraphy and arabesques hopes to provide the local viewers a context that is known and comforting, as well as reverential. The work creates a dialogue between the rich visual traditions embedded in Pakistani culture and contemporary art practice through both convergence and divergence.”

Butt was born in Lahore, Pakistan, and received her Bachelor of Fine Arts degree in traditional Indian and Persian miniature painting from the National College of Arts in Lahore. In 1993, she moved to Boston, Massachusetts, and earned her Master of Fine Arts degree in painting in 1997 from the Massachusetts College of Art and Design. Her work has been featured in several solo and group exhibitions, both nationally and internationally, and included in many national public and private collections.