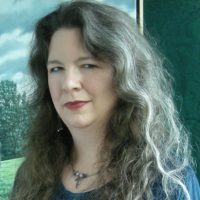 Inspired by the ancient Celts, who revered in-between places and times, Funderburk merges surreal figurative elements into sacred landscapes to represent the presence of the divine in her new series, Images From the Otherworld. These visionary works are based on her extraordinary experiences at sacred sites. Content for certain paintings is derived from meditation during yoga poses. Funderburk’s goal is to inspire both physical and psychological healing with her imagery. In her earlier body of work, a two-part figurative symbolic series called Wisdom of the Ancient Lore, she employed myth, symbol, and narrative as modern metaphor.

Funderburk was one of seven artists invited to participate in an art exhibit at The Chalice Well Trust, Glastonbury, Somerset, England, as part of their 50th Anniversary Conference in June of 2009. In 2008, she was selected for inclusion in the North Carolina Arts Council online Touring Artist Directory. Three of Funderburk’s works were chosen in 2007 to travel to the US Embassy in Estonia for a two year loan. In 2006, Funderburk was honored with a Women in the Arts seed grant by the Thomas S. Kenan Institute for the Arts in Winston-Salem, NC. She was awarded a full fellowship for an Artist’s Residency at the Vermont Studio Center in April 2005. In 2004, she was selected as one of fifty inaugural NC artists to have work featured on the Southern Arts Federation website, Southern Artistry. She was honored as one of the recipients of the Visual Artists’ Fellowship for 2002 – 2003 from the North Carolina Arts Council, and was a recipient of an Emerging Artist Fellowship Grant from the Winston-Salem Forsyth County Arts Council in 1990.

Funderburk was a freelance Exhibitions Coordinator and curator from 1989 to 2009, providing artwork for several alternative locations in the Winston-Salem, NC area. A former art instructor with the Sawtooth Center for Visual Art and Forsyth Technical Community College in Winston-Salem, NC, Funderburk now teaches privately, conducts various art workshops and seminars, and has served as juror for numerous regional exhibits. She and her husband, photographer James C. Williams, led an artists’ workshop to the Republic of Ireland in 2005. Funderburk has also written freelance reviews and articles for several different publications since 1994. In the summer of 2000, she served as the business consultant to help form a co-op and membership organization in Hickory, NC.