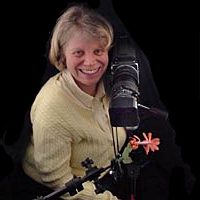 Amy Lamb’s love of the beauty and structure of the natural world has shaped her life. Her curiosity to understand the processes of nature inspired her to earn a Ph.D. in molecular biology in the 1960’s from the University of Michigan and to follow it with work in basic research in Switzerland and in the United States at the National Institutes of Health. After rearing a family and teaching cellular biology at George Washington University in Washington, DC, Amy became intrigued with the power of the camera to communicate visually what she had witnessed intellectually in the laboratory and the classroom. By the mid 1990’s, she was using the camera to explore the natural world and exhibiting her new work in gallery exhibitions. Now a still life photographer, Amy Lamb pursues work that is a logical continuation and expansion of her goal in research and teaching: to see, understand, and appreciate the awesome majesty of nature.

Her laboratory now consists of her darkroom, studio, greenhouse and extensive garden where she grows most of what she photographs. Her large-scale, close up portraits of fruits and flowers delight the eye and reveal the “uncharted” areas of beauty. The clarity and vividness of her work bespeak a universal language that communicates from eye to heart to mind. Of her work, the Washington Post has said, “Countless artists churn out hackneyed depictions of the overflowing vase or solitary blossom, but in this ocean of mediocrity, some, such as photographer Amy Lamb, will create fresh, captivating images of petals and perianths, making sense of the mania…. Whether fruit or flower, her subjects are usually at the peak of perfection. On a symbolic level, they serve, as they have for centuries, as allegories for the transient nature of life and beauty.”

Amy Lamb’s prints have a special quality that reflects her meticulous attention to detail. Working with David Adamson Editions, her photographic transparencies are often printed on textured, watercolor papers that maintain the brilliant colors and accurate details of the photograph while giving the feel of a watercolor painting.

Prior to her exhibition in the Steven Scott Gallery, Amy Lamb’s work has been shown in solo exhibitions in Washington, New York, Chicago, Philadelphia and other locations across the United States. Her prints are in numerous private and corporate collections both in the United States and abroad. Her works are included in in the National Museum of American History, the National Museum of Women in the Arts and other museums. Her images have been featured in the Smithsonian Magazine, Nature’s Best, Communications Arts, and Flora, a recent publication of floral photography published recently by Graphis.