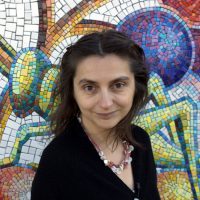 Dezsö is an award-winning illustrator whose work has been featured in many books, magazines, and CD covers, and by The New York Times, Sony Music, and Candlewick Press.

Dezsö exhibits in museums and galleries around the world, and teaches widely. She is Assistant Professor of Art at Hampshire College in Amherst, MA.

Dezsö is represented by the Nancy Margolis Gallery in New York, Gallery Wendi Norris in San Francisco, and Pucker Gallery in Boston.