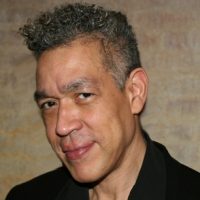 Andres Serrano, American photographer who became infamous in 1989 when Senator Alfonse D’Amato found Piss Christ (1987) blasphemous. A photograph of a plastic crucifix immersed in urine, the image has a beautifully religious visual intensity: Christ surrounded by a golden reddish glow, its mass-produced details effaced by the bubbly fluid. Much of Serrano’s work plays on and gets its strength from the contrast between rich visual qualities and disturbing subject matter: elegant abstractions made from Semen and Blood (1990); the chubby feet of a baby, revealed to be dead from Fatal Meningitis (1992). Sock elastic marks the ankles, a poignant tactile detail, but the desire to rub them better, as one would a baby, clashes with the thought of the clammy coldness of the corpse.