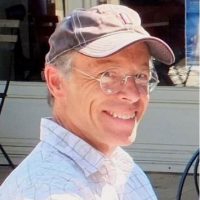 Andy Newman is an American painter who was educated in London and took his degree in Modern History at Trinity College, Oxford. After training and working as a lawyer in Washington, D.C., he began painting in earnest in the early 1990s. He has exhibited in London since 1992, including on several occasions at the Royal Academy Summer Exhibition, and has visited St Ives since the 1970s, where he has friends. He is represented also by galleries in the United States, Canada, France, Italy and Portugal. His 1998 New York exhibition prompted critic and art historian Donald Kuspit to observe, “There is a ghostly, dreamlike quality to Newman’s pictures, making their narrative all the more haunting and evocative…. Newman’s pictures are on the emotional cutting edge.”