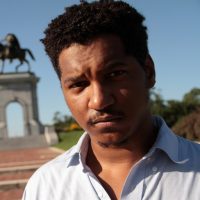 The nomadic New Orleans-born artist Angelbert Metoyer is one of the most imaginative creatives working today. He is highly collected in the United States and his work is exhibited in the permanent collections of various museums. He is interested in what he refers to as the “hidden language of religion” and across all of the mediums he works in – painting, sculpture, performance, video art and sound art – his explorations act as a powerful conduit to ancestral memory and what the radical psychoanalyst Carl C Jung would describe as the essential a priori archetypes that define what it means to be human.

Angelbert Metoyer exploded onto the art scene in 1995, when at the age of 18 he was included in dual exhibitions at Project Row Houses (Houston) and the Contemporary Arts Museum Houston. A series of solo exhibitions followed, at Barbara Davis Gallery (Houston), New Gallery/Thom Andriola (Houston) and Gerald Peters Gallery (Dallas). Over the years, Metoyer has become an increasingly recognizable player on the international stage with celebrated multi-media shows at Miami Art Basel (2009) and The Dactyl Foundation (2008), and he remains involved in various ongoing collaborations with the illustrious likes of the post-punk poet Saul Williams and the hip-hop performer Mike Ladd. Metoyer’s intuitive practice effortlessly spans a variety of media, but at the base root of his art-making are his dextrous drawings, which depict mythical creatures, star charts, anatomical studies and haunting ancestral figures. The drawings also feature hermetic markings and text fragments, and their surfaces are often encrusted with flecks of gold leaf, or traces of dirt gathered from places as far afield as China, Vietnam and Outer Mongolia.

Metoyer studied at the Atlanta College of Art and Design, where he created work that was soon being described by the eminent writer Marcus J Guillory as providing “a New World diasporic window into the cosmos”. Over the years, the mainstream media has all too often over-simplied Metoyer as an artist solely concerned with providing commentary on the African-American experience (he is a 13th generation descendant of a Creole family whose matriarch, the freed slave Marie Thérèse Coincoin, went on to become a plantation owner in Louisiana). However, Metoyer’s fascination with time, memory, arcane symbolism, quantum physics and cosmology take him far beyond such stifling parameters, revealing a staggering breadth of scope. What truly drives Metoyer is a deeply personal vision quest, and a determination to map the psychological landscape of what each and every human being on this planet refers to as heaven. Metoyer believes his ongoing investigations into what it means to be a sentient creature will reach their zenith in Mirror:Mirror 2012 – a global project involving the installation of twinned white-light emanating black mirrors in several locales; employing cutting-edge internet technology to explore social connectivity and the profound experience of archetypal light. 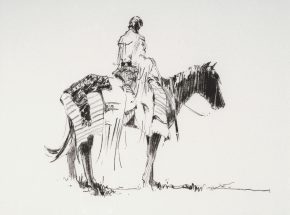