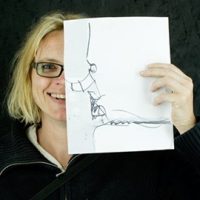 “My work is inspired by the natural world – its beauty and its cruelty, its hostility and its hospitality, its paradoxes and its contrasts. When looking at nature, one can’t help but see its destruction at the hands of humans. Our planet’s ecological balance has been severely compromised, and phenomena such as global warming and the deterioration of the ozone layer affect every inch of the planet. I feel strongly that each of us must use the tools at our disposal to preserve and restore the natural world. As an artist, I employ visual language to address these issues with the goal of awakening interest and inspiring my audience to action. I also work with groups such as the Irish Peatland Conservation Council and biologists, to learn more about each series’ subject in order to better understand and communicate its essence. Art has the power to make one see things in a new light. It allows us to develop a love for places and things that we would otherwise not have noticed, or thought of as ugly or boring. It helps us discover the beauty of the ocean floor, the dirt that is bog, the bark of a tree. Rather than re-creating a landscape on a canvas, I aim to express its essence. Each multi-layered rendering shares details
with the other works in the series. Ultimately, each piece captures some fragment of the landscape’s power until the larger body of work coalesces to express its deepest essence.”

Anne Stahl has studied at the Photography Foundation, Scotland, and received an Irish National Diploma in fine art, painting, and printmaking from Dun Laoghaire College of Art and Design. She has also taken a printmaking workshop in Dublin, Ireland, and an etching course in San Luis Obispo, California. The recipient of several awards and commissions, she has participated in shows in the United States, Ireland, and Australia.
Stahl’s work can be found in several private and public collections. 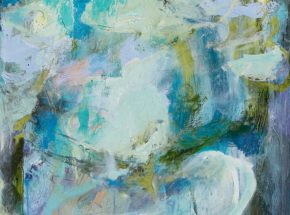