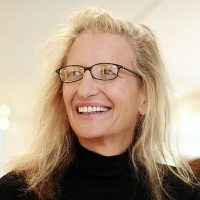 Annie Leibovitz was born in Connecticut and began photographing for Rolling Stone magazine in 1969 while still a student at the San Francisco Art Institute. Famed for her iconic images of celebrities, including John Lennon and Yoko Ono, Arnold Schwartzenegger, and Hillary Clinton, in 1983 she became chief photographer for Vanity Fair. A regular contributor to Vogue as well, she is the winner of numerous awards and her exhibitions have toured the world many times over.

She is the author of several landmark books, including Women (1999), with an essay by Susan Sontag, American Music with texts by Patti Smith and Roseanne Cash (2003), and 2006’s A Photographer’s Life: 1990-2005 (all Random House). In addition to her world-renown portraiture, she has also documented battered women, and conflict in Sarajevo, Bosnia, and Rwanda.

In 2005 American Photo named her the single most influential photographer at work today.