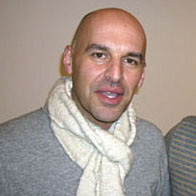 American artist Anthony Pearson’s Transmission sculpture series, ongoing since 2011, is made from sheets of steel with cement. They stand more than two meters high, reference photographic prints and paintings, and have been described as “undeniably elegant and commanding” (Jonathon Griffin, Anthony Pearson: The Man Who Wasn’t There, March 7, 2013). By experimenting with the formal limits of photography, where his practice originated, Pearson has found a visual vocabulary rooted in abstraction that explores, among other poetic expressions, the balances between positive and negative, lightness and darkness.

Pearson notes, “… The notion that an object could function as a flat and uniform image from one vantage and as a staggered group of screens from another was appealing to me, simply because it addressed both essential concerns of drawing (illusionary space) and essential concerns of sculpture (physical space) simultaneously.

My work often uses the idea of transformation, e.g. drawings that become photographs, clay forms that become castings, as an act to make malleable the very medium itself. This malleability evokes the mystery of process, alchemy and metamorphosis.”

Pearson was born in Los Angeles, California, where he is based. He earned a Master of Fine Arts degree from the University of California (1999) and a Bachelor of Fine Arts degree from the California College of the Arts, Oakland, (1996). Known for his “sensitivities to materials,” Pearson works primarily in sculpture and photography. His work has been compared to black and white abstract expressionist painting, with references to Franz Kline, Helen Frankenthaler, and Robert Motherwell, in “rapt in conversation with the art of the past,” (Griffin 2013). He has had exhibitions in Miami Beach, New York City, London, and Mumbai.