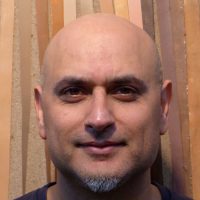 Artist Antonio Puri was born in Chandigarh, India, and raised in the Himalayas, where he attended English and International boarding schools. Those early influences became his springboard to combine traditional concepts and modern abstract art. Puri believes that the important mystery in art flows from the nature of reality, which is itself ultimately mysterious. His penchant for mystery is reinforced by his belief that non-objective expressionist painting is ultimately a spiritual act. Puri has had more than a dozen solo exhibitions worldwide, and his art may be found in numerous museum collections. His work has been reviewed in the New York Times, Washington Post, Philadelphia Inquirer, Indian Express, among several other periodicals. He studied art at the Academy of Art in San Francisco and Coe College, Iowa. He has held residencies in Hungary, Bulgaria, South Africa, Serbia, Mauritius, and Romania. Puri currently lives and works in Philadelphia.

His Inner Home series investigates identity and roots, however strained. By offering constant shifts in perspective, from close-up to far away views, his works allow, “the distance from ‘home’ …to be perceived as physical and emotional,” as stated by Maiza Laurent Hixson of the Delaware Center for Contemporary Art. Puri has said of his work, “…I have been to at least 49 countries for a very specific reason. And that is, that not more than one year of my life should be attributed to a specific country. Otherwise, it makes my work feel like it is Indian art or American art or European art. I want to break any label like that and make art that is just universal, that is not bound by nationality or culture. I want the universe to be my home, wherever I am at the moment.”

After growing up in north India, he attended the Academy of Art in San Francisco and Coe College in Iowa for a Bachelor of Arts degree in Art and later a JD degree from the University of Iowa. He has exhibited his work in solo and group exhibitions worldwide in venues like Austria, Sweden, Australia, among others. He has done residencies in Hungary, Bulgaria, South Africa, Serbia, Mauritius, India, Denmark, and Romania.