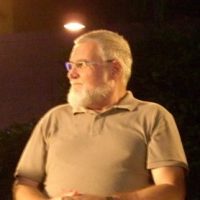 Born in Barbados in 1945, Atkinson has lived the majority of his life there except for three years in Grenada. He returned to Barbados in the late sixties when he started to exhibit. This artist is known both for his abstract as well as his representational work.

His paintings are collected widely with a number of pieces in the Barbados National Collection and the Art Collection Foundation of Barbados.

His paintings have formed part of Barbadian Art exhibitions in Cuba, Dominican Republic, France, Grenada, Guyana, Jamaica, Japan, as well as the U.S. in Miami, Albany and Washington DC and in the U.K. in London. He has had numerous one man shows in Barbados, the last being at Zemicon Gallery in Bridgetown.

He is currently working towards a show in his realist style to be held in November at The Queen’s Park Gallery. This will feature paintings sited along the East Coast of Barbados from Conset Bay to Belleplaine, following the path of the now defunct Barbados Railway.