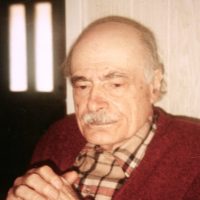 Rarely do we discover a worthy artist who works alone and unheralded. Arthur Pinajian was one of them. He drew and painted in obscurity until his death in 1999 at the age of 85. Sharing a modest one-story cottage in the village in Bellport, New York, with his sister Armen, Pinajian depended on her totally for financial and moral support.
To our knowledge, no articles were written about Pinajian and he exhibited and sold his paintings only rarely. Despite this neglect, he pursued his art steadfastly and with incredible determination. The majority of his work was found after his death stacked up in the one-car garage and attic of his sister’s property. Along with the art were found his journals, many letters, and sketch books that spanned the 50 years of his creative life. When all is said and done, this oeuvre is important because it represents an artist’s life in its totality. Within it is found a prize legacy that will endure for posterity; the remainder will win the respect of scholars as they study in depth the life of a truly original artist.
Pinajian, the son of Armenian holocaust survivors, was a native of Union City, New Jersey. He started as a cartoonist in the 1930s and found considerable success fashioning comic strips for Quality, Marvel, and Centaur Comics.

After World War II, during which he earned the Bronze Star for valor, he rejected commercial art, attended the Art Students League in New York, and committed himself to the pursuit of serious painting. Prior to his many years in Bellport with Armen, he rented a studio in Woodstock, New York, and there and in West New York, New Jersey, he began to wrestle with the challenges of being a modern artist.

This meant painting in a variety of styles ranging from the figurative to the abstract. The word exploration sums up the nature of his quest: he worked in the manner of Impressionism, Fauvism, Expressionism, and Cubism before turning to Surrealism and various modes of abstraction, including Abstract Expressionism. Part of Pinajian’s learning process was to echo the styles of well-known artists — making free copies as a means of perfecting his visual vocabulary. In the end, however, he forged his own style without a heavy debt to others. He also philosophized about the creative process. Found among his effects were numerous journals in which he wrote down his ideas about the making of art. Issues of color, composition, and pattern captured much of his attention.
It is noteworthy that he became a veritable master of structural color.
What is so remarkable about Pinajian is his wholehearted dedication to the process of painting. He pursued his goals in isolation with the single-minded focus of a Gauguin or Cezanne, refusing to give up in the face of public indifference. In his later years he could be compared to a researcher in a laboratory pursuing knowledge for its own sake.
Pinajian’s work is uneven, but when he hits the mark, especially in his abstractions, he can be ranked among the best artists of his era. It is satisfying to contemplate his more successful works, doubly so because they capture the excitement of visual modernism and exude a painterly integrity that is rare in our time. — William Innes Homer 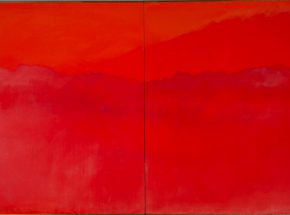