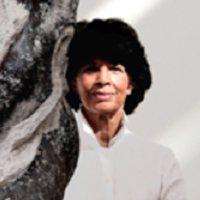 Artis Lane was born near an all Black village in North Buxton, Ontario, Canada. After three years of art college in Toronto, Canada, Artis Shreve Lane moved to Detroit to study at Cranbrooke Art Academy. While in the Motor City she painted the sculpted the portraits of many of the business and political leaders of the day; Governor George Romney, Ford family members and Colemean Young, the Mayor of Detroit. From Detroit she moved to New York City, spent time in Texas, Ruidoso, New Mexico and traveled to Mexico City, Mexico to paint many of the prominent families in the region. She eventually returned to Los Angeles where she has called the city home for over 35 years.