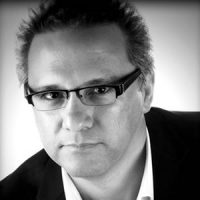 Arturo Almeida was born in Brownsville Texas in 1962. At a young age, Almeida moved to Corpus Christi where he later became an artist and independent curator. Arturo Almeida’s photographic works take inspiration from Mexican American culture, such as the Papel Picado tradition. Studies in both composition and nature, Almeida’s work delivers dramatic visions of the everyday; elevating these common sights to a place where they stand alone as works of art.

Almeida enrolled at Del Mar College and continued his studies in photography at San Antonio College and the Southwest School of Art and Craft. In 2000, Almeida established the Café Latino Gallery. As owner and curator, Almeida held exhibitions of now prominent artists including Alex Rubio, Vincent Valdez and Kathy Vargas. In 2003, Almeida joined The University of Texas at San Antonio as Curator of the UTSA Art Collection under President Ricardo Romo. A committed advocate of the San Antonio arts community, Almeida is curator of the celebrated Arte Latina: Roar exhibition. In 2007, Almeida curated the work of 13 artists and six writers to celebrate his mother, ideas of liberation, empowerment and voice at the Blue Star Contemporary Art Center. Almeida’s dedication to representing San Antonio and South Texas artists has created meaningful relationships between the university and the thriving arts community of San Antonio. In 2007 Almeida and President Ricardo Romo founded the South Texas Print Series, inviting emerging and established artists to the UTSA printmaking studios. Featured artists create an edition of prints for UTSA and provide learning opportunities for students in the Department of Art and Art History. Approximately 30 artists are expected to participate in the series. Almeida has also helped create new exhibition spaces and opportunities for cultural exchange with partnering museums. Collaborating with the Institute of Texan Cultures (ITC), Almeida initiated the Texas Contemporary Artists Series. Through 2010, ten contemporary artists will have solo exhibitions that reflect upon their relationship to San Antonio and South Texas. The series is an effort to examine the melting pot of San Antonio artists through the work of artists who have gravitated toward Texas, both personally and artistically. In an effort to showcase artwork from the collection, Almeida is currently in the process of producing a book focusing on 200 artworks from the collection. Artists include Graciela Iturbide, Jesse Trevino, Cesar Martinez, Judith Baca and Manuel Alvarez Bravo. In addition, President Ricardo Romo and author John Phillip Santos will be contributing writers. The release of UTSA Art Collection: Vol 1 is expected for 2010.