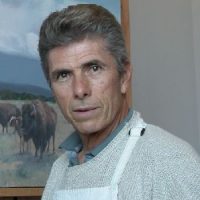 Arturo Chávez was born in Embudo, near Taos, New Mexico and was raised in both Los Alamos and Chimayó, New Mexico. This culturally rich area with its geographically striking landscapes sparked a deep and abiding devotion for painting in Arturo from an early age. He painted throughout his childhood and teen years, but didn’t turn his full attention to his artwork until the late 1970s. In 1983 he made the decision to pursue painting as his fulltime career. Chavez’s style is his own, but he acknowledges strong influence from several mentors: Irby Brown, Wilson Hurley, Mie Shu Ou, and Arthur Sussman.

Chavez has enjoyed international recognition, having previously exhibited in the US Embassy in Moscow and in the US Embassies in both Croatia and Guyana. Among his list of clients are many corporate and private collectors, such as the Madi Museum in Budapest Hungary, Fuji Electric in Japan, Sandia BMW in Albuquerque, New Mexico State University in Las Cruces, New Mexico, The Taos National Guard, The Millicent Rodgers Museum in Taos, The Kierland Westland Resort and Spa in Scottsdale, Arizona and the Bernalillo County Court House in Albuquerque to name a few.

Chavez resides and paints in Placitas, New Mexico with his wife Jennifer their son, Benjamin and twin daughters, Marisa and Nichole. 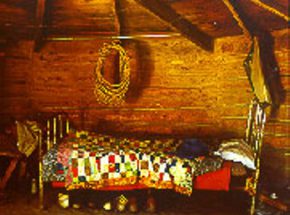