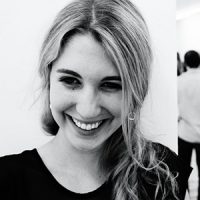 Ashley Zelinskie is an artist based in Brooklyn. Her work is conceptual and based on blurring the lines between art and technology. Each of her pieces takes for granted that computers will outlast their makers and that technology will supplant humanity. Her goal is to create art for the Singularity. Her Reverse Abstraction series begins with a simple premise: that humans and computers perceive the world through different languages, and what is concrete for one is abstract for the other. The objects and shapes so familiar in human art can be neither perceived nor conceived by computers in their original form. Likewise, the codes that are so familiar to a computer are merely scattered symbols to human sensibility. The Reverse Abstraction series attempts to bridge the gap by constructing traditional objects in dual forms: as the classical object and as the hexadecimal and binary codes that represent them. Thus, abstraction becomes material, the meanings for humans and computers are united, and the duality is resolved.