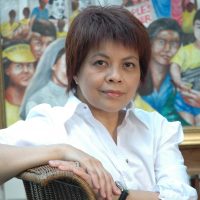 Athena Magcase- Lopez is a visual artist, portrait painter and children’s book illustrator. She holds a Bachelor’s Degree in Fine Arts from the College of the Holy Spirit in Manila. She has been an art director, art educator, and kindergarten teacher. Her vibrant illustrations are featured in the recently self-published children’s book, A Star Story. She was one of the seven Filipina artists featured in Filipina Artists in Diaspora, edited by Thelma B Kintanar of the University of the Philippines Center for Women’s Studies.

Her solo exhibitions are: A Journey to a Nation’s Past, United Nations, NYC, 2008 and A Retrospective: The Art of Athena, Angel Orensanz Foundation Center for the Arts, NYC, 2007. She was part of the recently concluded group exhibition, Triumph of Philippine Art, which traveled from the George Segal Gallery, NJ to Fisher Museum, L A and finally to its homecoming exhibition at Ayala Museum in Manila.

She was president of the New York-based Society of Philippine American Artists (SPAA) from 2008 – 2010 and currently serves in its Board of Directors. 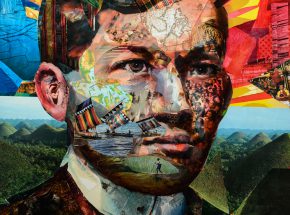