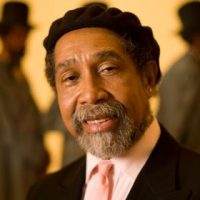 Barkley L. Hendricks (born 1945, Philadelphia, Pennsylvania) is a contemporary American painter who has made pioneering contributions to black portraiture and conceptualism. While he has worked in a variety of media and genres throughout his career (from photography to landscape painting), Hendricks’ best known work takes the form of life-sized painted oil portraits. In these portraits, he attempts to imbue a proud, dignified presence upon his subjects, most frequently urban people of color. Hendricks’ work has been noted as unique for its matrimony of both American realism and post-modernism.

Hendricks earned his certificate at the Pennsylvania Academy of the Fine Arts, and received both his Bachelor’s and Master’s degrees from Yale University. Currently, he serves as a professor of art at Connecticut College.