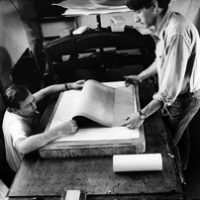 Born in Ginnejen, The Netherlands in 1936, Ben Berns moved to North Carolina to teach at UNC Greensboro in the mid-60s. Awarded a Guggenheim Fellowship in 1971, Berns has exhibited in New York, Denmark, and The Netherlands. His work appears in books and reviews in international periodicals. He currently resides in Maryland.