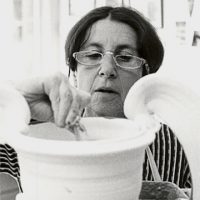 A ceramic sculptor who is one of the modernist artists responsible for potterys’ inclusion as ‘fine art’, Betty Woodman, at age 76, had a retrospective exhibition at the Metropolitan Museum in 2006. Her work, with its brightly colored designs and loosely painted images is closely tied to abstract painting, and her methods, including the use of cake decorating equipment as tools, is certainly not conventional.

The Met exhibition was described as “less a retrospective than a sprawling installation that extended to the rafters of the awkward, box-shaped, special exhibitions gallery in the Wallace Wing. . . .the visual excitement, the raucous extravagance, audacity and joyful eccentricity of Woodman’s recent installations overwhelmed the small selection of early work, . . .” (195)

Woodman trained from 1948 to 1949 in western New York State at the School for American Craftsmen at Alfred University. She was especially taken with pottery from the Italian culture such as Etruscan earthenware, and since then has created pottery reflecting not only Italian influences but work from the Tang Dynasty, Okinawa, India and the Baroque period in Europe. She also affiliated herself with the New York branch of the Pattern and Decoration movement.

In 1953, she married George Woodman, and they moved to Albuquerque, New Mexico where he attended art school for abstract geomentric painting and she created pots using her backyard adobe kiln.

Upon his graduation they moved to Boulder, Colorado where he taught at the University, and she set up a ceramic studio. She also taught pottery in community centers and from 1978 to 1998 at the University of Colorado. In 1980, the couple also bought a loft in New York City, and spending much time there, were influenced in their art expression by iconoclastic movements that rebelled against the austere, prevailing Minimalism.

In 1982, Woodman did her first installation, which was a collaboration with Cynthia Carlson and “juxtaposed her ceramic tiles and Carlson’s wallpaper.

Overall her career is a mixture of “sculpture, painting and architecture to create a certain amalgum of her own.” (199)