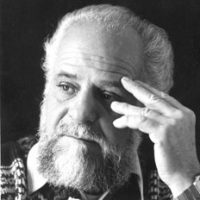 Robert Freimark was born in Doster Michigan. He received a Master of Fine Arts from Cranbrook Academy of Art in 1951 and in the same year had his first solo exhibition at Circle Gallery in Detroit. His first solo show in New York City was at Rockefeller Center in 1954. Freimark has worked in many media including painting, drawing, printmaking, tapestry and film. Throughout his career his work has focused on issues of social protest; a 1991 retrospective at Gavilan College in Gilroy, California was titled “Forty Years of Conflict – Within and Without,” and a 2000 retrospective held at the Mexican Heritage Plaza in San Jose, California was titled “The Art of Dissent.” In 2003 he premiered his film, “Los Desaparecidos” (The Disappeared Ones), a documentary based on the stories of women who survived the murderous kidnappings perpetrated by the Argentinean government in the 1970s. The film was shown in twenty international film festivals and received seven awards, including the World Film Festival Houston Award.

Freimark’s awards include a fellowship from Art Interests, Inc. to study with Max Weber (1954), a Ford Foundation Artist in Residence Grant (1965), and a Western Interstate Commission for Higher Education Grant (1967). In 1973 he was a fellow at Impressions Workshop in Boston and in that year had a two person exhibition with Stanley William Hayter at Harold Ernst Gallery, Boston. In 1980 he was invited to create and execute a tapestry, “Olympic Flame,” for the Olympic Games in Moscow. In 2008 he was an invited artist who exhibited work in “Olympic Fine Arts 2008,” an exhibition that was organized by the International Olympic Committee and the Ministry of the People’s Republic of China. The exhibition was presented in Beijing.

In 2007 Freimark has two retrospective shows. “Bob Freimark: Art of Dissent,” was shown at the Mexican Heritage Plaza in San José, California, and “Between the Curtains: Bob Freimark’s Czech Romance 1970-1995,” was mounted by the San Jose Museum of Quilts & Textiles in San Jose, California.