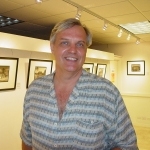 Bob Kiss was formally trained in the Rochester Institute of Technology five-year BS/MS program. Originally a Manhattan based fashion and advertising photographer, he settled in Barbados in 1993 after twenty years in the fashion fast lanes of Paris, Munich, Milan, London, L.A., Rio, and Sao Paulo. He shot for the European Vogues, Italian Men’s Bazaar, Andy Warhol’s INTERVIEW magazine, among many others, as well as for numerous fashion and cosmetic clients. A number of his photos have appeared in the Hasselblad Manual. Shows of Bob’s work include the International Museum of Photography at the George Eastman House group show in 1988 (with a print in the permanent collection), and group shows at Central Falls Gallery and Café Luxembourg in 1982 and 1983. He studied film making at New York University and theater directing at Masterworks Laboratory Theater. He continues to direct TV commercials.

Since moving to Barbados Bob has begun making his personal fine art photographs in addition to pursuing advertising and fashion assignments. In recent years he has had shows at Holder’s House, the American Ambassador’s residence, Queens Park Gallery, and Kirby Gallery. In November 1997 two photographs and two covers which Bob photographed for INTERVIEW magazine were shown in the Andy Warhol Retrospective at the Whitney Museum of American Art in New York City and which has subsequently toured the world.

Bob is presently working on a long-term book project of fine art black and white photographs of Florence and Tuscany, Italy. He is also curating a collection of glass plate negatives made between 1880 and 1937 by the Barbadian photographer, Parkinson.

Bob is currently beginning work on Platinum and Palladium printing.