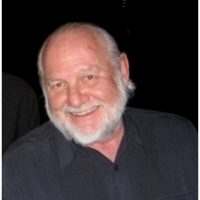 Bob Wade is an artist in Austin, Texas who helped shape the 1970s Texas Cosmic Cowboy counterculture. A retrospective of his work was exhibited at the South Austin Museum of Popular Culture in the fall of 2009. Bob Wade: 40 Years of Blood, Sweat and Beers; catalog of South Austin Museum of Popular Culture, ‘Jason Dean Mellard.’ He is best known for his creating over sized sculptures of Texas symbols and for experimenting with hand-tinting black and white vintage photographs transferred to large photo canvases. His 40-foot-long (12 m) Giant Iguana sat on top of the Lone Star Cafe in New Your City in 1978. Other works include giant armadillos, dancing frogs, urethane-foamed World’s Biggest Cowboy Boots originally installed near the White House, a 70-foot-tall saxophone and a New Orleans Saints helmet created from a Volkswagen beetle, currently atop the Shoal Creek Saloon in Austin, Texas.

Wade has received three National Endowment of the Arts grants and has been included in Biennial exhibitions in Paris and in New Orleans. His work has been part of the Whitney Museum of American Art Biennials in New York and in the collections of the Houston Museum of Art, the Austin Museum of Art, the Chase Manhattan Bank, the Menil Collection, and AT&T. Wade was dubbed a “pioneer of Texas Funk and connoisseur of Southwestern kitsch,” by the Fort Worth Star Telegram.

Son of a hotel manager, Wade grew up in numerous Texas cities. This early hotel life contributed to Wade’s interests in the American road and highway kitsch. While in high school in El Paso, Wade joined a car club and would go south of the border to Juarez to enlist skilled technicians to customize his hot rod. Moving to Austin, Wade studied art at the University of Texas from 1961 to 1965. His slicked back hair, ’51 Ford hot rod and El Paso style earned him the nickname of “Daddy-O.” Upon graduation from UT, Wade earned a Masters in painting at the University of California at Berkeley. There the artist connected his border sensibilities to the developing “funk art” pioneered by Bay Area artists.

Following his time in Berkeley, Wade returned to his home state to make art and teach in Waco, Dallas, and Denton, successively. Wade helped create a small art community in the Oak Cliff area of Dallas with artists, George Green, Jim Roche, and Jack Mims. They became known as the Oak Cliff Four. Together they booked gallery shows and a group show at the Tyler Museum. In 1971, Dave Hickey’s South Texas Sweet Funk exhibition at Austin’s St. Edwards University catalyzed the art scene developing out of the Texas counterculture, bringing the Oak Cliff Four together with Jim Franklin, Gilbert Shelton, Luis Jiménez, and others. Wade soon turned to a new process with his work in photo-emulsion canvases, which quickly drew attention in the larger art world. Continuing this technique, Wade transferred vintage and Texas themed photos to photo-linen on a large scale and airbrushed color. These works include photos such as Mexican revolutionaries, a cowboy band, Texas boys and their guns, Yaquis, and his most well known, the 10′ wide canvas, “13 Cowgirls”.

Wade served as an art ambassador, serving up Texas culture for art audiences nationally and internationally. In 1976 Wade returned to the Bay Area to recreate a Texas honky-tonk in the midst of the San Francisco Museum of Modern Art, cantilevered a taxidermied rodeo horse to a wall in the Tex-Lax exhibition at Cal State-Los Angeles, and turned the Lone Star state itself into a roadside attraction for the French with his Texas Mobile Home Museum in the Paris Biennalle of 1977. A 1976 documentary by Kenneth Harrison, ‘Jackelope’, focused on Wade, George Green, and James Surls. In the documentary Wade goes on a road trip across the state collecting materials for a display of Texas culture in a New York gallery. Another documentary on Bob Wade’s career, “Too High, Too Long and Too Wide,” is by New York filmmaker Karen Dinitz and features his road trip across Texas in his Iguanamobile, a 1956 Airstream designed to promote his 1995 book, “DADDY-O, Iguana Heads and Texas Tales,” St. Martin’s Press. And finally, as of June 1, 2010, the famous 1978 Lone Star 40 ft. Iguana was installed on the roof of the Ft. Worth, Texas Zoo. 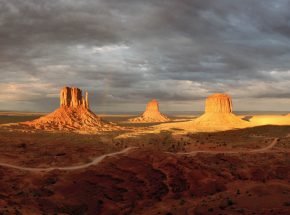