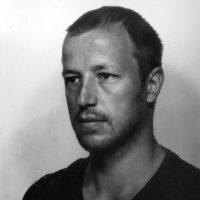 Bojan Sarcevic’s poetic works approach a coherent articulation of the global condition of displacement. Through architectural interventions, videos, and collages, his projects transfer forms from one context to another. These pieces create a sense of the uncanny and emphasize notions of temporality and space.

In past works, Sarcevic has formally juxtaposed two cultures by placing Gothic architectural references in one corner of an exhibition space and Islamic patterning in the other; exposed the residues of labor through worn work clothes; and forced a meeting between rival art institutions by applying a photo mural of one’s exhibition space to the wall of the other’s. With a delicate sculptural sensibility, Sarcevic’s works manipulate expectations to expose traces of social and political history.