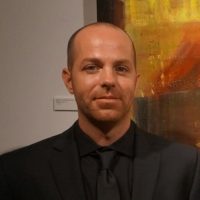 Brett Amory gained broad recognition for his ongoing series “Waiting” (2001–), depicting anonymous commuters he encountered in urban settings; it was lauded for its psychological depth and representations of alienation in contemporary society. These paintings are based on photographs taken by the artist, who explained he was drawn to subjects who appeared out of place, alienated, or awkward. In the more recent paintings from the series, Amory began to eliminate parts of the architecture or scenery to heighten the sense of isolation. He paints in a realist style characterized by gestural brushwork and the use of translucent layers of paint for a hazy effect; his palette is muted and tends towards contrasts of dark and light. While his influences vary, Amory has said that the New Topographics have been an influence, for their similar pursuit of capturing beauty in the everyday and overlooked.