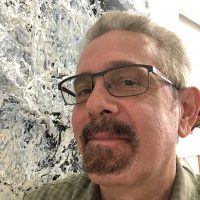 Born and raised in New York City, Bruce Minson taught English and Theatre Arts to New York High School students for thirty years. During his tenure he was also a writer and director in the Off-Off Broadway world in New York.

After miraculously recovering from a serious illness two years after retiring, he realized he had been given the rare second chance to fulfill what he had long thought possible: creating art in his own studio on his own terms. He subsequently enrolled in the Arts Student League of New York, and had the incredible fortune to meet a supportive, influential and inspiring mentor at the League as well as a group of exciting, quality artists.

After receiving one of the League’s major awards, he struck out on his own and continued his journey to become a studio artist. Since then, he has been selected to show in more than a dozen exhibitions, while passionately searching for his own artistic voice to share with others.