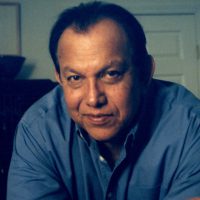 In the fall of 1975, Andrade continued his art education by entering the Master of Fine Arts program in painting at the University of Michigan. While at Michigan, he studied with the American Surrealist artist, Gerome Kamrowski, and with Albert Mullen. Both of these artists had studied with Hans Hofman, the great Abstract Expressionist painter and teacher. Andrade also studied with George Bayliss, Dean of the School of Art, and Vincent Castagnacci. Castagnacci had studied with Josef Albers at Yale University. Andrade was also fortunate to study color theory with Si Sillman, visiting professor from Yale University. Sillman had studied color theory with Josef Albers at Black Mountain College. Andrede continues today to utilize the Albers’ method in his capacity as a university professor. Rudolf Arnheim’s course in Art and Visual Perception at the University of Michigan also had a profound impact on the young Andrade.

After graduating from Michigan in 1977, Andrade continued to paint. His works have been exhibited in fifteen shows in New York City – four solo shows and eleven group shows. He has also exhibited at numerous other venues, including the Edith Baker Gallery in Dallas, Texas. Andrade was the founding partner of MB Modern with Michael Lathrop. This mid-town New York City art gallery exhibited contemporary art for five years (1996-2001) in a space in the Fuller Building at Madison Avenue and 57th Street.

Andrade was awarded the Artist Fellowship Grant by the National Endowment for the Arts, Washington, D.C., in 1980 and 1989. In 1996, Andrade was inducted into the Smithsonian Institution’s National Museum of American Art archive. His works are included in many corporate and museum collections throughout the country.

Today, Andrade’s paintings are widely exhibited and have been reproduced in numerous publications. One of his paintings appeared on the cover of Art and Antiques (summer, 1997). His exhibitions have been reviewed in The New Yorker (1999), Artforum (1990), NY ARTS Magazine (1997) and Review: The Critical State of Visual Art in New York (1999). Some of the books that he has been included are: Contemporary Chicana and Chicano Art: Artists, Works, Culture and Education, Vol. 1 (Bilingual Press at Arizona State University, 2002); and The Artist as Native; Reinventing Regionalism (Pomegranate, 1993); and The Artist and the American Landscape (First Glance Books, 1998). His work has recently been included in two textbooks: The Visual Experience (Davis Publications 2004) and Art (Scott Foresman Publsiher, 2005).

In addition to his very active career as a painter, Andrade is an art professor. He taught for three years at Stephens College, before returning to Texas in 1981. Since that time he has taught at Texas A&M University – Corpus Christi. He has been able to influence and inspire several generations of young painters through his excellent teaching methodology and his compassionate interest in the professional development of his students.