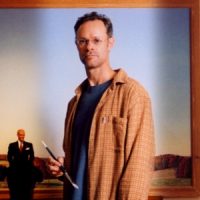 Renowned illustrator Bryan Haynes has created a vision of the hills that surround the St. Albans, Missouri area in painted landscape that is truly unique. Influenced by regionalist painters of the 1930’s WPA period such as Grant Wood and Thomas Hart Benton, Haynes brings the genre into the twenty-first century.

The commercial work of the artist has graced the pages of national magazines, international advertising campaigns, CD covers, posters, and book covers from Agatha Christie to the cover of “Scarlett” the sequel to “Gone With the Wind”. Since graduating of the Art Center College of Design in 1983 his artwork has been represented by Bernstein & Andriulli in New York, Ron Sweet in San Francisco, and Foster Represents in St. Louis. Some of his many patrons have included Disney, Estee Lauder, Warner Bros., Toblerone – Switzerland, Universal Studios, IBM, Nike, Sony Music Corp., and Anhueser Busch. 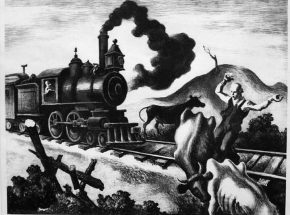