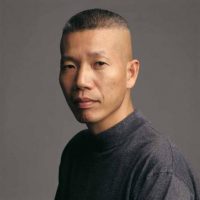 Cai Guo-Qiang was born in 1957 in Quanzhou City, Fujian Province, China. Trained in stage design at the Shanghai Theater Academy, his work has since crossed multiple mediums within art, including drawing, installation, video and performance art. While living in Japan from 1986 to 1995, he explored the properties of gunpowder in his drawings, an inquiry that eventually led to his experimentation with explosives on a massive scale and to the development of his signature explosion events. Drawing upon Eastern philosophy and contemporary social issues as a conceptual basis, these projects and events aim to establish an exchange between viewers and the larger universe around them, utilizing a site-specific approach to culture and history. He currently lives and works in New York.

Cai was awarded the Japan Cultural Design Prize in 1995 and the Golden Lion at the 48th Venice Biennale in 1999. In the following years, he has received the International Association of Art Critics (IACA), New England for Best Installation or Single Work in a Museum (2005), the 7th Hiroshima Art Prize (2007), the 20th Fukuoka Asian Culture Prize (2009), and IACA’s first place for Best Project in a Public Space for Cai Guo-Qiang: Fallen Blossoms (2010).

Among his many solo exhibitions and projects include Cai Guo-Qiang on the Roof: Transparent Monument, Metropolitan Museum of Art, New York, 2006; Transient Rainbow, Museum of Modern Art, New York, 2002, and APEC Cityscape Fireworks Show, Asia Pacific Economic Cooperation, Shanghai, 2001. He also curated the first China Pavilion at the 51st Venice Biennale, 2005, and held the distinguished position as Director of Visual and Special Effects for the opening and closing ceremonies of the 2008 Summer Olympics in Beijing.

More recently, Cai’s retrospective I Want to Believe opened at the Solomon R. Guggenheim Museum, New York in February 2008 before traveling to the National Art Museum of China in Beijing in August 2008 and then to the Guggenheim Bilbao in March 2009. Last year Cai Guo-Qiang: Peasant Da Vincis, opened in May 2010 as the inaugural exhibition of the Rockbund Art Museum in Shanghai. Cai also created Odyssey, a permanent gunpowder drawing for the Museum of Fine Arts, Houston in Fall 2010. Installed as part of the museum’s ongoing Portals Project, it is one of his largest gunpowder drawings to date. Another solo exhibition Cai Guo-Qiang: Sunshine and Solitude is currently on view at Museo Universitario Arte Contemporáneo, Mexico City.