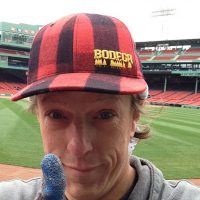 As a thirteen-year-old in February of 1990, Caleb Neelon visited family friends in small-town Germany with his mother and took a side trip to Berlin. For Neelon, the sight of the newly opened Berlin Wall, covered in graffiti and murals was a revelation. By the mid 1990s, Neelon was immersed in the global graffiti scene under the name SONIK. He traveled constantly and developed a vivid, homespun, and raw style of mixed media painting. He freely crossed boundaries between graffiti, murals, and what would soon be referred to as street art. At the same time, he wrote in-depth articles for graffiti fanzines. As years passed, these publications evolved into art and popular culture magazines, trade books, and feature films.

Caleb Neelon’s bright, folksy works, frequently incorporating nautical and quilting motifs, can be seen in gallery and museum exhibitions and on walls around the world. In addition to visiting artist talks and programs, Neelon’s work ranges from cultural diplomacy projects through the U.S. State Department; curatorial advisory work at museums, projects bringing artwork to hospitals, and public artwork projects in over thirty countries around the globe. Neelon regularly writes for national magazines and has authored over a dozen books, among them the landmark 2011 HarperCollins release The History of American Graffiti, co-authored with Roger Gastman, and the 2014 AMMO Books retrospective Ed Emberley, co-authored with Todd Oldham. He lives and works in Cambridge, Massachusetts, with Ellen, daughter ZZ, and French bulldog Ferdinand. 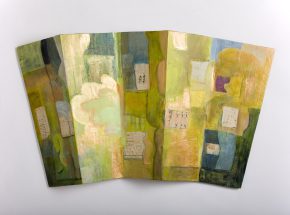