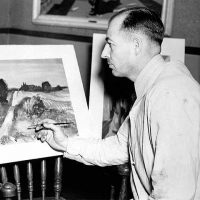 Cameron Booth attended the School of the Art Institute of Chicago. While a student there, Booth visited the 1913 International Exhibition of Modern Art, later known simply as the Armory Show. Here, he was exposed to works of artists such as Picasso, Cezanne and Braque. After serving in World War I, he remained in France to further his studies. In 1921, Booth took a teaching position at the Minneapolis School of Art (now the Minneapolis College of Art and Design). He returned to Europe in 1927 and 1928 to study with Andre L’hote in Paris and Hans Hoffmann in Munich. Throughout his career, he incorporated ideas of Post-Impressionism and Cubism into his works depicting rural subject matter in a realistic manner. Later in his career, he also began working in the loose and gestural style of Abstract Expressionism. Booth’s work employs color as a means of communicating feeling and emotion, and seek to balance vision and expression. He believed that the success of a work lies in its original conception, and for this reason, he rarely reworked his paintings. His love of the outdoors and understanding of nature permeate his art.