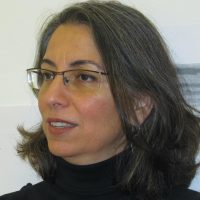 Canan Dagdelen was born in Istanbul in 1960. She finished St. Georg Austrian high school. In 1978, she started working with ceramics at the private workshop of Nasip Iyem. In 1980, she went to Austria to study at the Academy of Fine Arts, but there, she first enrolled to Vienna University of Economics and Business Administration. After accomplishing her economics degree in 1986, she continued her study at the Department of Ceramics and Design of University of Applied Art, Vienna, where she closely worked with the head of the department, architect Matteo Thun.

In 1992, Dagdelen had her first exhibition in Vienna. She displayed same exhibition in Chicago next year. In addition, she has had many solo exhibitions in the world, especially in Vienna and Chicago on a regular basis. She has also participated in numerous group exhibitions in different cities of Austria, in Germany, Belgium, Denmark, Holland, Hungary, Norway, Japan and United States of America. Dagdelen was awarded by the Austrian Design Institute in 1991. She also received a prize from the International Biennial of Ceramics in 1996 and from the Austrian Ministry of Culture in 1998. Her ceramic and porcelain works, as well as photograph works can be seen in many public and private collections in the world, including the collection of the 21st Century of Contemporary Art Museum in Kanazawa, Japan, the State Collections of Austria (Neue Galerie) and the collections of Fine Arts Academy of Applied Arts. Since 2003, she has taught at the University of Applied Art in Vienna, Institute of Artistic Sciences, Art Education and Communication, Department DAE / Design Architecture and Environment. In 2005-2006, Dagdelen received the title of professor at the University of Art and Industrial Design, Institute of Art and Design in Linz.

In her workshop in Vienna, Dagdelen currently continues working on concepts such as “existence” and “dissolution”; “gravity” and “lightness”, “fragility” and “rootedness”, which constitute the basis of her art for more than fifteen years.