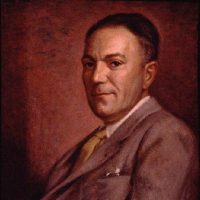 Carl Gaertner, an American artist, was born in Cleveland in 1898 and remained there until his death in 1952. He studied at the Cleveland Institute of Art, which was then called the Cleveland School of Art, from 1920–1923 and taught there from 1925-1952.

Gaertner’s subject matter varied, but certain themes recur in his work, including industrial subjects, with Cleveland as his model in the early part of his career. Other themes were Provincetown, West Virginia watercolors and oils, and Chagrin Valley paintings. After 1935, Gaertner bought a farm in Chagrin Valley and began his series of paintings of that subject.

The Akron Art Museum currently holds three paintings by Gaertner. Featured in the McDowell galleries is Riverside Plant an oil on canvas painted in 1927-28 which was exhibited at the Cleveland Museum of Art Annual Exhibit of the Cleveland Artists and Craftsmen from April 25-June 3, 1928. Also in the Akron collection is ‘Summer Kitchen a gouache on fiberboard painting done in 1947 and The Commuter an oil on fiberboard painting done in 1945 which shows a man standing on a train platform and is based on sketches Gaertner did while riding the train to New York City to visit his art dealer.

Gaertner was an important Cleveland artist who was just achieving national acclaim before his early death at the age of 54.