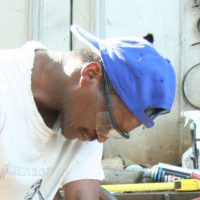 Carlton Simmons, a nephew of Philip Simmons, enjoys the free style design in iron with an eye on nature. He went into the blacksmith shop at the age of 13 also – the same as his uncle and cousin, Joseph Pringle.

Educated in the public schools of Charleston, he remembers his shop classes best. While apprenticing with Mr. Simmons, he learned his craft well; However, when left on his own, you will see his artistic ability demonstrated in mini scenes in wrought iron. There are blooming flowers through a patch of grass that almost appears real.

During the years of working as a team with his uncle and cousin, Carlton participated in the fabrication of many of the gates that the Simmons Blacksmith Shop is known for that beautifies the city of Charleston. His hearts, fish, and plant hangers are becoming a “must have” by those who visit the shop when in Charleston.