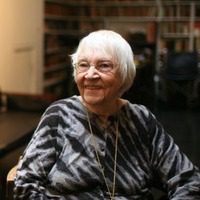 Carmen Herrera is a Cuban painter, born in Havana, who has lived in New York since the mid-1950s and has recently seen her work recognized in international circles. After six decades of private painting, she sold her first artwork in 2004 when she was 89 years old. A retrospective exhibition opened in July 2009 at the nonprofit IKON Gallery in Birmingham, England, and is traveling to the Pfalzgalerie Museum in Kaiserslautern, Germany from January 23rd to May 2nd 2010. London’s Tate Modern and the Hirshhorn Museum and Sculpture Garden in Washington, D.C. have recently acquired her works.
Her work has an almost spiritual precision and is highly reminiscent of Barnett Newman. She was a contemporary of many abstract expressionist artists but since she painted in relative obscurity, remained unknown till recently. Her works, viewed in light of the time period they were painted in, are important milestones in evolution of the geometric minimalism movement.