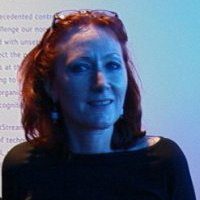 Carter Hodgkin blurs boundaries between digital media, drawing and painting to create work reflecting states of instability. Embracing the infinitesimal realm of physics, Hodgkin manipulates computer code to generate animations of simulated particle collisions. From these animations she captures still images to create paintings and drawings which explore a new language of abstraction.

Most recently, Americans for the Arts cited her permanent Public Art Project “Electromagnetic Fall” as one of the best public art projects for 2010. Hodgkin is a 2009 Fellow in Digital/Electronic Arts and a 1989 Fellow in Painting from the New York Foundation for the Arts. She has been awarded fellowships from the Gottlieb Foundation and the Pollock-Krasner Foundation as well as being nominated for fellowships from Anonymous Was a Woman and the Louis Comfort Tiffany Foundation. In 1992, she was a Workspace artist at Dieu Donne Papermill, New York.

Articles and reviews of her work have appeared in such publications as Artforum, Art in America, Arts Magazine, Flash Art, Artbyte and The New Yorker. Her work is included in Art+Science Now, a visual survey of artists working at the frontiers of science and technology published by Thames & Hudson. Selected collections include the U.S. Library of Congress, the Jane Voorhees Zimmerli Art Museum, Goldman Sachs, and Pfizer Corporation.

Ms. Hodgkin received a B.F.A. from Virginia Commonwealth University and a Certificate of Advanced Multimedia from NYU. She also attended the San Francisco Art Institute, Pratt Institute and the School of Visual Arts. She teaches at the Parsons/The New School of Design and Queens College, NY. Carter Hodgkin lives and works in New York and is represented by Denise Bibro Fine Art.