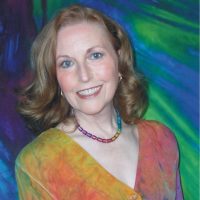 Caryl Bryer Fallert is internationally recognized for her award winning art quilts. She is best known for her organic, curved seam designs, her scintillating use of color, and her multilevel illusions of light and motion. Her attention to detail has earned her a reputation for fine craftsmanship as well as stunning designs.

In 2000 Caryl was selected as one of the 30 most influential quilt makers in the world, and her quilt Corona #2: Solar Eclipse was voted one of the 100 Most Important Quilts of the Twentieth Century. She was chosen for the Bernina Leadership Award in 2003 and in 2004 the readers of American Quilter Magazine voted her “All American Quilter.” She is the 2006 recipient of the International Quilt Festival Silver Star (lifetime achievement) Award. Since 1983, Caryl’s work has been exhibited extensively throughout North America, Europe, Japan, and the Pacific Rim. She has had ninteen solo exhibitions, including a 1992 exhibition in Tokyo, Japan, and a 2000 exhibition in Burlington, Ontario, Canada.

Caryl is the only three-time winner of the coveted American Quilters Society Best of Show, Purchase Award. She was the 2009 International Quilt Festival Best of Show winner, and her quilts have also been awarded Best of Show in more than a dozen other national and international exhibitions. In 1986, Caryl received the Masterpiece Quilt Award from the National Quilting Association. She has received the Master Awards for both Contemporary Artistry (2002 & 2006) and Machine Artistry (1997) from the International Quilt Association and Best Machine Workmanship from the American Quilters Society (2004 & 2009) and the Quilting the Quilt national exhibition (2003). Caryl has authored two books, and numerous workshops on CD-ROM. Her quilts have appeared in hundreds of national and international publications, including the covers of the 1987 and 1991 Quilt National Catalogs.

Born in 1947 in Elgin, Illinois, Caryl graduated with a BA from Wheaton College in 1969. She also studied art at Illinois State University, College of DuPage, and University of Wisconsin.

Caryl was a lifelong resident of Northern Illinois, until 2005, when she moved to Paducah, Kentucky, to take part in that city’s artist relocation program. In April of 2006, she opened the new Bryerpatch Studio shop, gallery and workshop center in Paducah KY’s historic Lower Town Arts District.

Caryl finds her greatest joy designing and making her quilts and sharing what she has learned with students in her workshops and lectures, which have taken her to eleven countries on five continents. Her goal as a workshop leader is to help each student find the key to her/his personal creative style.