Dominant among Haitian painters, Castera Bazile was born in Jacmel, Haiti in 1923. He was a domestic employee of the Centre d’Art in 1944, while it was being organized. At some point he began to paint, and in the early 1950’s he decorated the Episcopal Holy Cathedral of Port-au-Prince with three murals: The Ascension of Christ, The Baptism of Christ, and Christ Expelling the Money Changers from the Temple. In 1955 Bazile won the grand prize in the Caribbean International Art Competition organized by Alcoa, and in 1957 he received first prize in the another international art exhibition sponsored by Holiday magazine. He died prematurely of Tuberculosis in 1965. Bazile’s work is in a variety of public and private art collections including the Musee d’Art Haitien du College Saint Pierre in Port-au-Prince, the Milwaukee Art Museum, the Davenport Museum of Art, and the Museum of Modern Art in New York. 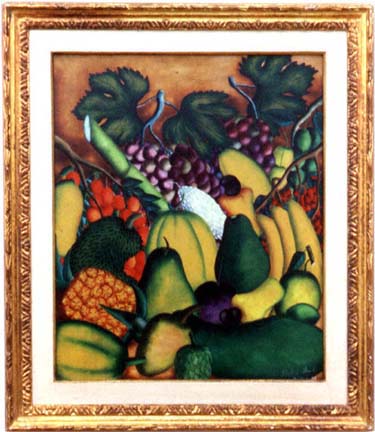