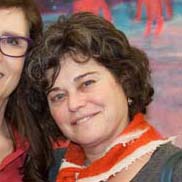 Cecily Kahn is a native New Yorker who has lived in New York City most of her life. She lives and works in a large top floor loft on Canal street and Broadway, overlooking one of the busiest intersections in Manhattan. Her paintings reflect both the angularity of the city as well as the organic chaos of city life. Cecily received a BFA from Rhode Island School of Design, and went on to study printmaking in Italy for two years at the Calcographia Nazionale in Rome and the Segnio Graphica in Venice. She is represented in New York by Lohin Geduld Galery and in Atlanta by Thomas Deans Gallery. Her work has been exhibited at The National Academy, The Painting Center, Katherina Rich Perlow gallery, and Sideshow Gallery. Her work has also been exhibited at the Center for Maine Contemporary Art, at the New Britain Museum of American Art, and at The Hillwood Art Museum, and the Museum of Modern Art, in Bogota, Colombia. Her work has been included in the exchange shows between The Painting Center and artists groups in Ireland, Barcelona and Colombia. Her work has been reviewed in Art in America, The New York Times, The Brooklyn Rail, d’Art International, REVIEW Magazine, and in Abstract Art Online. Cecily is a current member of the American Abstract Artists group, and is Chair of the Advisory Board of The Painting Center.