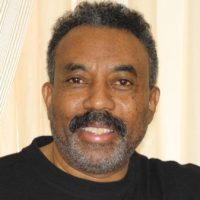 I was born in North Carolina and my family soon moved to New York City, I would spend most of my youth between the two places. As a young man I served in the U.S. Air Force, after which I would use the G.I.Bill to pursue my childhood dream of becoming an artist. My schooling began at Sacramento City College where my main interest of study was painting, drawing and printmaking. Three years later I would transfer to NYC to study at Pratt Institute to complete my studies in Fine Arts. Today I realize the influences of the Bay area Expressionist and the northern California painters have remained an influence; as well as my ten years as an employee at the National Gallery of Art here in Washington where the history lessons were so many. But make no mistake about it I’m the artist that I am because of the decade of the eighties when I drove a NYC taxi and became consumed by the downtown arts and club scene that produced grafitti and hip-hop and a new wave of painters like Basquiat, Keith Haring and the american master artist Romare Bearden who were Instrumental friends. And from these experiences I draw upon to create the work I do today.Briefly in talking about the work, I’ve recently returned to pure abstraction or a type of color field painting. After many years of working with the figure in different combinations of medium, be it graphite and watercolor, pastels, or oils I’ve used a juxtaposition of minimal geometry with the figure to try to satisfy my love or need for abstraction. I use many media or mediums to speak to the journey that I’m on, everything is possible. 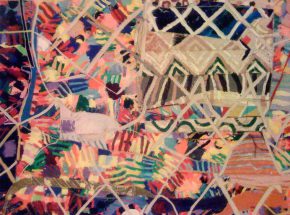