Cha Kyu-sun paints images of trees and flowers. It reminds us of a spring scene in which flower petals like plum or cherry blossoms swirl about in the wind. His painting is inspiring, leading viewers to some magnificent, mysterious, or uplifting moment of nature and life. It thus enhances our emotions and gives us pleasure, stimulating viewer sensibility and touching spiritual vitality. His work enables us to spiritually leap. His painting is initially derived from some concrete scene. He captures a specific scene in photographs first and then tries to represent his inspiration or impression of the scene in his painting. That is to say, he paints the nature he sees with his mind’s eye. He starts with the real and moves forward to the nature viewed with his mind’s eye and a world loaded with his meaning and spirit. His painting is therefore very similar to traditional paintings of the Four Gracious Plant (plum, orchid, chrysanthemum and bamboo) and ink wash landscape painting. A Korean view of nature and esthetic seems to melt into his work.
The main elements of Cha’s work are his memories of pine trees (nature) near his home, Gyeongju, austere and modest Buncheong stoneware, and his preference for the old. He has tried to realize the specific nature of the clay and surface of Buncheong ware, stoneware made of gray clay and brushed with white slip by mixing pigment and clay and adding glue. Achromatic tone is often referred to as the tone of Buncheong or Korean color (similar to monochromism). The flashy colors of flowers also the color Korean nature retains. Cha embraces these colors. Natural images such as plum blossoms, pine trees, and flowers make incarnate the beauty and flavor of Korean nature. This is like the aesthetic sense formed in the Korean people when they have been with nature for many years and the principle or providence of nature they have explored. The traditional Oriental view of nature was to realize the principle of phenomenal aspects of life through nature’s change.
Ancient people in the East referred to the rule of nature such as the repetition of change and the circulation of creation and extinction as “Tao” (道), a concept signifying the “way” or “principle.” The key in Oriental art was to realize this. Painting is also to realize the Tao of nature. According to the Eastern view of nature, Asian people saw the ecosystem as a magnificent forum of life or a field of harmony and coexistence. Humans and all things in the universe are elementally associated and communicate with one another. Such ontological insight that man and things are one and the same is in the same context with the assertion that humanity is not the only subject and that all beings can be the subject
He realizes images occurring in his mind or scenes he saw or remembers. With this his paintings become meditative images of nature loaded with his spirit and thought. In his painting, memories of nature our ancestors felt and saw are summoned to the present through the medium of the artist. 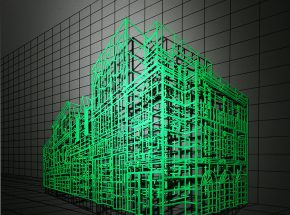