Born and raised in Buffalo, New York, Coleman studied art under William Holbrook Beard “and an itinerant painter, Andrew Andrews whose real name was Isaacs.” Between 1859 to 1862, Coleman studied in Paris under Thomas Couture, returning during the American Civil War to serve with the Union Army during which he was seriously wounded and recovered in New York City. He returned to Europe in 1866 with fellow painters William Morris Hunt and Elihu Vedder.

After time in Paris and Brittany, he moved to a Roman apartment previously occupied by poet John Keats before finally settling in Capri. He converted the former Santa Teresa convent into Villa Narcissus in 1870. A part of that villa was dedicated to a “palace of art” with antiquities and his own paintings. He remained in Capri until his death.

His work was exhibited in the United States and England. 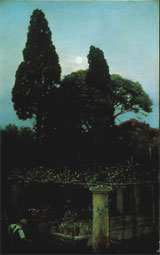