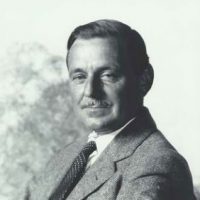 Best known for his paintings of Monhegan Island and Old Lyme Connecticut, Charles Ebert was born in Milwaukee, Wisconsin. The Ebert family moved shortly thereafter to Rockford, Illinois. They then moved to Kansas City, Missouri where Charles had an early friendship with artist, Ernest Lawson.

Ebert enrolled in the Art Academy of Cincinnati (1892-93), a year in New York at the Art Students League followed, and then to Paris. From 1894 to 1896 he studied at the Julien Academy in Paris (1894-96), under Benjamin Constant and Jean Paul Laurens.

When Ebert returned to the United States in 1896 he opened a studio in New York City and attempted to earn a living as a freelance illustrator. He was almost out of money when he sold a satirical cartoon to the original Life Magazine. He became a full time illustrator for Life and very soon was widely known as Life’s chief political cartoonist. After four years of illustrating and painting at the same time he began to devote his efforts solely to painting.

About 1900, he moved to Greenwich, Connecticut and studied under John Henry Twachtman. In 1903, he married Mary Roberts, a watercolor painter, who also studied at the Art Students League and with Twachtman. He began exhibiting in 1907 including the National Academy of Design, the Carnegie Institute, the Corcoran Art Gallery, the Pennsylvania Academy of the Fine Arts, The Art Institute of Chicago, Salmagundi Club, and the Panama-Pacific Exposition (1915).

The Eberts lived in Greenwich, Connecticut until 1919 and then they moved to the very active art colony at Old Lyme, Connecticut. In 1909, the Eberts had begun to spend their summers on Monhegan Island, Maine. In the 1920’s the Eberts began annual winter trips to Florida, where they became members of the Sarasota Art Association. In this period, Charles Ebert ventured into painting with watercolors. He moved between Florida and Bermuda and to the Bahamas, creating watercolors and oils.

Charles Ebert was ill for several years and only a few paintings were completed in that period. He died on October 2, 1959, and was buried with his wife Mary, who had died in 1956, in the Duck River Cemetery, Old Lyme.